Here is what we discuss on this Podcast!

Do you think cable providers will change or will online streaming take over?

Thanks!
Posted by Unknown at 7:32 AM No comments:

So today I'm checking the news as normal and I find this article from PC Magazine:

It states that 3 teens have been arrested for "Violent GTA 5 Robbery". However if you read the actual article you'll learn that it is 3 teens that attacked this one man and stole a watch, a mobile phone and a copy of Grand Theft Auto 5.

So why is it not for "Violent Mobile Phone Robbery" or "Violent watch Robbery"?

Every time a violent video game comes out we get this same Bull from the media.  The Video Game industry may not be huge but it's here and I can only hope that it continues to grow and providing more and more jobs.

Why is it that we can have a ton of action and horror movies and everything is ok but we need to treat video games so different?  Games HAVE a rating systems just like movies, if parents don't enforce them, that's their problem.  I would argue that the rating system in video games is even better than that of movies, on the back of every box you can see what the rating is and you can see why it got the rating it did.  Just takes a minute to look at, not even.

But my issue right now is with the media, they are always trying to find a way to make something sound more important than what it really is so that they can get more views and therefore more money.  Had this story been about the kids stabbing this man to steal a watch, a phone and some cash it would have never made it online, but wait, they also got GTA 5 out of it, oh, no, now it's worth something, now people will care!

I'm not even a fan of GTA games but I know that MILLIONS of people play those games every year, if video games were really as bad as we try to make it sound, we'd have a lot more problems.

But no, "Man gets stabbed and Robbed by 3 teens" just doesn't get you the views that adding GTA 5 in the title will.

There were a lot of people getting this game this week, I would expect more cases of people that got robbed that happened to have their game with them.  I have it in my bag right now because I forgot to take it out at home, I guess if I get mugged today it'll be because of the game. . . .

Twitter: @tsnstuff
G+: +Javier Torres
Posted by Unknown at 10:42 AM No comments:

Today I learned that STEAM, the company that PC video gamers are always talking about, is planning on starting a new service soon called "Steam Family Sharing".  Currently it's still in development but it should be going into beta testing soon and hopefully sometimes next year the service will be fully working.

So what does this mean?

Basically it's a service that will allow you to share your steam games with other friends or family on steam.  So lets say I have the game Tomb Raider that I purchased but I'm already done playing it or just lost interest, I could just let you use it.

This is how I understand it to work, any of this could change though.  You add me as someone who can share games with you and I add you as well.  Now we can both see all the games that the other one has.  It doesn't look like there will be a way to filter only a few games that you'd like to share.  If you find a game in my library that you'd like to play, you can request to borrow it.  I then decide if I want to let you use it.

Back when the XBox One was first announced they wanted to do some type of Family Sharing thing but never really explained their vision very well, they were also making this the only option of getting games, with PC games you can still just go buy a PC game and bypass steam completely.

Personally I think it's a great idea, I hope it becomes a normal service sooner than later because really once you've played a game it sucks that it's just there in your library without anyone using it.

This is the first ever Anarchy Live podcast, the setup is a bit different from our normal Game X Presents podcast so we were a bit lost, it'll get better :)

Thanks!
Posted by Unknown at 7:24 PM No comments:

Ok so yesterday was new iPhones day and the fact that I said YESTERDAY and I'm writing this the next day should tell you just how excited I was about the whole thing,  but really, who gets excited about the S variant of an iPhone anyway?  We already know it's going to be basically identical to the previous one.  It's going to be faster with an upgraded CPU and it's probably going to have some new feature that the previous one doesn't have.  This is basically what we did get.

Lets start with the most expected, the iPhone 5s: 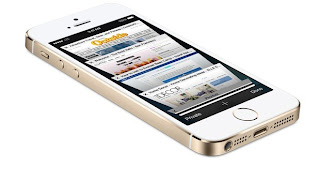 It no longer comes in black or white, now it's silver, space gray and golden.

As expected, it's twice as fast as the iPhone 5 with it's 64bit A7 CPU.  Just like the Galaxy S4 it has a chip inside to help keep track of how much you walk and other fitness stuff.

They are going the HTC way with the camera, they didn't mention how many pixels but it looks like it's probably a 8 Ultra Pixel camera, just like HTC they mentioned that instead of going with more Megapixels they decided to go with larger pixels, so, Ultrapixels.

The main difference here is the fingerprint scanner on the home button, you can now unlock the phone with your fingerprint.  Personally I don't really care about the feature for locking and unlocking the phone, however, if they make this available to developers so that we could use it as our password for other applications, that could certainly be cool.

The prices are the same as usual so I won't even cover that.

Next we have the iPhone 5c: 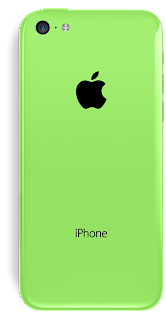 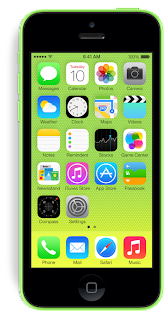 This is the rumored Plastic iPhone.  The back is made of plastic and it comes in several colors.  Supposedly the background in iOS7 will match whatever color phone you have but I really hope you can change that.

My question is, why would anyone want to buy the iPhone 5c?

When you just see it as $200 vs $100 it does seem like a huge difference, but when you think about the real amount that you pay, it just doesn't seem worth it to got with the 5c.

Posted by Unknown at 6:03 AM No comments: