Today Google announced a couple of things that I'd like to talk about.  In this case I'll talk about the New Nexus 7! 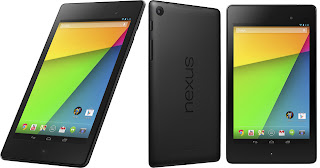 This new Nexus 7 tablet will obviously replace the old Nexus 7 and it will begin shipping on July 30th.

So what is so special about this new Nexus 7?

The screen on the old Nexus 7 was never a bad screen, for such a cheap tablet it was actually pretty good.  However this new screen comes in with a resolution of 1920 X 1200.  This is supposed to be the highest PPI tablet on the market now.  Of course that probably wont be for long.  It's nice however to see the Nexus 7 screen right up there with the beautiful screen of the older (although not so much) Nexus 10.

Unlike the Original Nexus 7, the new Nexus 7 has a rear camera.  Don't expect too much from it, it's a 5MP camera, so I wouldn't even expect to be able to record at 1080p, but at least its there.  Personally though, I'm of the belief that people should never be taking pictures with their tablet unless that's all they have available.  There will be a 1.2MP camera in the front

The old Nexus 7 used to run on the Tegra 3 processor, which was a great processor, it also had 1GB of ram on it.  The New Nexus 7 will be running a Quad Core Snapdragon S4.  On paper the difference doesn't seem that big, both are Quad core processors, the old one was 1.3Ghz and the new one is 1.5Ghz but I believe the S4 processor has proven to be a much nicer processor than the Tegra 3. The new Nexus 7 now also has 2GB of ram which should help it even more.

A few other things:

The new Nexus 7 has a few other things that I figured I'd mention.  First is the GPU, it uses the same GPU as the Galaxy S4.  It also has a HDMI out port which is for the most part useless but every now and then you do want to use it.  Another thing that I absolutely love that I'm sure a lot of people will find useless is the addition of Qi Wireless charging.  I know plugging it in is not that big of a deal but I am in love with Qi charging.

The one thing that puts this tablet down some is the fact that it is actually more expensive than the previous model, which is a bit weird because normally electronics stick to a specific price point if they are replacing a previous model.

Are the extra things like Qi Charging, HDMI Output and a higher res screen worth the extra $20-$30?  Personally, I think so.
Posted by Unknown at 12:54 PM