Javier's Thought on the Election

Last night President Barack Obama won re-election and I'm very happy for that, but look at this map: 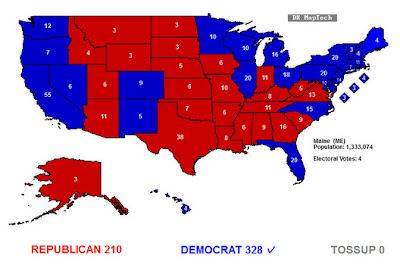 This is not a time for Democrats to be gloating, we (and I'll say we because I voted for Obama, not because I consider myself a Democrat) may have won but obviously this country is more divided than I originally thought.  I always saw Mitt Romney as a joke, as some Democrat who decided to switch sides just to try his luck.  I saw his ideas to be too much like George W. Bush's ideas that got us into these wars to begin with and I never would have imagined so many people would care for that mentality again.  I didn't think the guy who helped ship so many jobs outside the US would ever have a chance.

I don't think people who voted for him were really thinking about any of that though, they were either thinking about how little they felt Obama had done for them or they were just voting based on their faith thinking they have to impose their beliefs on everyone else.  Regardless of the reason, truth remains that there is a big divide in this country and we should learn to respect each other and maybe just maybe listen to each other a little.  Both sides can be so close-minded.

Let us quit complaining about how the Government wont work together and let US learn to work together and maybe then we'll be able to build a better country.  Let us remember that regardless of the many issues it has, this country is still one of the best countries out there.  And I'm not saying that in a "HELL YEA! AMERICA! WE KICK ASS" type of ways,  I am saying it in a "I'm grateful that I get to feel safe when I go to sleep at night" way.  I'm grateful that I don't have to worry about some bombs falling on my roof or my loved ones living in the middle of a war zone and getting blasted because they didn't run fast enough. I'm grateful that when I go to sleep at night I normally know what I'll have for breakfast the next day and that I can plan Thanks Giving dinner with my sister.  I'm grateful that I don't go to the Doctor not because I can't but because I chose not to.  God Bless America?  We HAVE been blessed and if we don't see it we are blind.

Javier Torres
AnarchyLive.com
Posted by Unknown at 4:21 AM No comments: