The iPad Mini and a few more things

Today Apple had their press event and announced a bunch of new things. Some of the things they announced were changes that people were waiting for, like the new Macbook Pro 13 inch with a retina display.  Some other things were not very impressive like the new Mac Mini.  Some things were just kind of cool but useless, like the new iMac with an extremely thin edges.  There was also a somewhat updated iPad.  They only updated the processor however which makes you wonder if this is what the iPad 3 was supposed to be.  The iPad 3 is no longer being sold.

Lets go back to the iMac for a second. 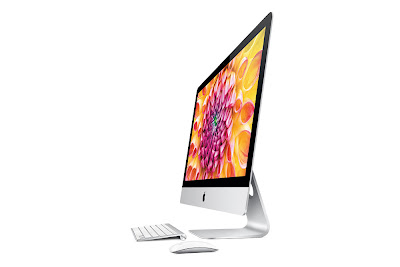 Pretty?  Yes very.  Although I must admit when I first saw it I thought the full body was that thin, I couldn't believe it, where would they have added all the components?   Well, turns out that only the edges are that thin, the back actually bulges out.

However, in order to make it that thin they had to use some special new type of welding technology to make it happen.  This is where I have to ask, is this really necessary?  I mean, making it this thin and having to find new methods of making it happen simply adds to the price.  I could understand it on a laptop, you carry that thing with you, but how thin do you really need your desktop computer to be?

Ok, now lets talk about the main thing that everyone was waiting for from this event, the iPad Mini. 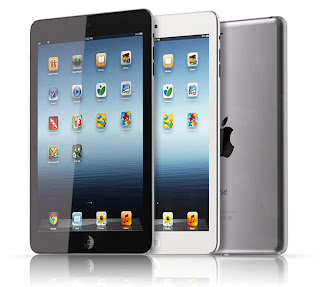 What we have here is a 7.9 inch iPad that will run everything a regular iPad can.  It is basically a smaller iPad 2.  It has the same screen resolution as an iPad 2, it has the same CPU as the iPad 2 as well.  It has a better rear camera than the iPad 2 though, if you are into using that.

As you may know the main competitor here would the Google Nexus 7 and Apple made sure to try convince everyone about how much better the iPad Mini was compared to the Nexus 7. 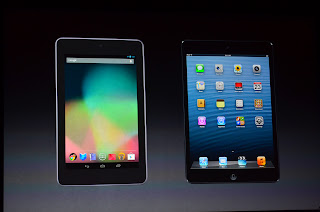 I'm not going to deny everything they said, it's true, the iPad Mini has a larger screen so it's easier to read things, cuz. . . they are . . . bigger.

1. The Screen is indeed larger on the iPad Mini, but the resolution and pixels per inch are better on the Nexus 7.

Trust me, had they made a better screen for the iPad Mini they'd be flashing those numbers all over the place.

2. The Specs on the Nexus 7 are more impressive.  The iPad Mini has an A5 chip inside, which is basically a 1Ghz Dual core processor while the Nexus 7 has a 1.3Ghz Quad Core Nvidia 3 Processor in there.


Now to be fair, both Operating systems have very different requirements from the processor.  The iPad Mini doesn't have much going on at the same time so it can work just fine with a slower processor, the Nexus 7 has real Multitasking where different applications can be open at the same time and it has to deal with widgets and live updating and all the other things Android can do.

Some people may say it's not fair to compare pricing of a 8GB device to a 16GB device.  I say screw it.  There is a lot of people out there who just want a device for some light reading, checking web pages, youtube videos, emails, simple stuff.  These people don't need a lot of room on their devices.  So it's not my fault if Apple doesn't offer a 8GB version.

I will not deny that the iPad has better Tablet apps, I've said that many times.  But as Android tablets get more popularity, this will continue to change.  But I wont lie, it's upsetting at times.  I always use Facebook as an example, the iPad application is so great and the Android one is just horrible.   Supposedly Facebook is working on a complete change of the app, but I don't know if that includes a Tablet mode or not.

I have to say the people I do feel kind of bad for are those who recently bought an iPod Touch for $300 because they just wanted to do simple things online but couldn't afford the iPad.  For $30 more they could have just bought the iPad Mini.  I honestly do hope Apple allows these people to exchange.