Today was the big day that so many were waiting for, the day when Apple announces the new iPhone and announce it they did.  Now it's time for me to tell you what I think about it.  I will try to be as unbiased as possible in my writing.  I like to say my issues with Apple are with the company and how they run certain things, not with the devices.  So here is the iPhone 5. 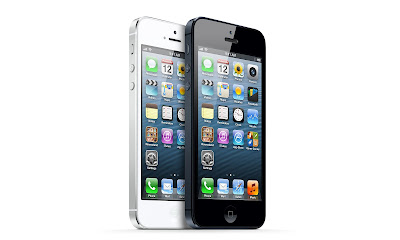 For the first time ever, the iPhone has a larger screen.  It's not any wider, it's just taller.  I honestly can't say how that feels in the hand because I haven't tried one, but I can say tha tin some pictures it looks fine, in others it looks a little weird.

With the longer screen comes a larger screen resolution.  However, it will look exactly like the iPhone 4s and the 4 before it because it has the same pixels per inch.  The resolution is actually lower than a lot of the phones the competition has, but since the screen is smaller, it still looks impressive.

One thing that will be annoying with the new screen at first is that apps that are not made for the longer screen will show up with black bars on the top and bottom.  Since the screen is not wider, they can't just zoom the app. 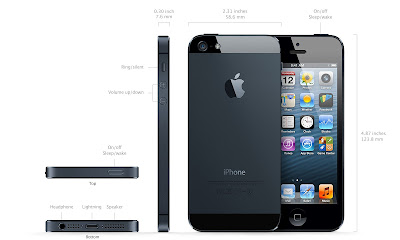 To me the overall design looks just like the iPhone 4 and 4S.  But I'm sure that when you hold it and inspect it you will notice a big difference.

The Body is made of aluminum and the front is all Glass.  I do think the black one looks absolutely beautiful and I think this phone will bring the black iPhone back in style.  I can't remember the last time I saw one.

I wanted to mention this one before I forget.  Here is the new Lighting connector: 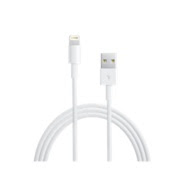 I guess they came up with Thunderbolt before so now they wanted Lighting?  Probably should have gone the other way around but whatever.

I love this connector, I really do, it's nice and small and best of all, it doesn't matter how you plug it in, it'll work.  What I don't love is the fact that it's on the iPhone.  Now, I'm not saying that as an Apple hater, I'm saying it as a consumer.  There are SOOOOOO many products out there with iPod connectors and now just like that they've become somewhat useless.  Now you have to go buy new ones.

I don't think the 30 pin connector we are used to were a big problem.  They are certainly thin enough that they would have worked fine on this iPhone.  With that said, i can understand why Apple wouldn't want to be forced to use that connector all the time simply because of all the products out there.  I mean, if you have a good idea then go for it.  But it certainly will be inconvenient for a lot.

The "Good" news is that you may not be completely screwed.  If you have a device that uses the old 30 pin connector, you can get one of these: 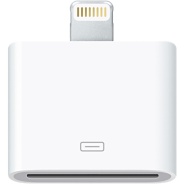 This connects to your 30 pin device and then you can connect your iPhone to it.  This will be great for some devices, but I can certainly see this being completely useless on a lot of iPod stereo systems. But to be fair, it's probably time you upgrade to a bluetooth stereo system anyway.

The Camera on the iPhone 5 is . . . . well. . . the same.  I was rather disappointed with this one.  Normally Apple seems to put a lot of work into that.  Technically this camera is different, it's smaller and supposedly better glass and better image stabilization.  But really it's still the same 8MP Camera from the 4S.  Which don't get me wrong, it's still the best camera on a cell phone out there, except for maybe the Lumia 920.

The Front facing camera did get an upgrade and it is now a 720P camera so you can do HD Facetime chats.

The Rear camera can now also take pictures while recording video and it has a panorama mode.  Both things the competition already does but it's certainly good to have those options.  Although honestly they are both rather useless, at least to me, only time I use landscape is when I'm on vacation.  But again, that's just me.

The camera is supposed to be 40% faster, but I believe that's just due to the faster processor.  Honestly I don't know if things like taking pictures while recording and panorama are iPhone 5 things or iOS 6 things.

The iPhone 5 uses the A6 CPU.  It's supposed to be 2 times faster than the A5 in performance and video.  Not totally sure how it compares to the A5X on the iPad.  Not much I can say about this till it's been tested out more.

Yes, the new iPhone 5 will have LTE.  Which will be awesome and all iPhone owners will finally understand why their Android loving friends have been talking about it for years now.

The Battery life on the new iPhone is supposed to be as good as always even with LTE.  That's the thing about Apple, we Android fans have been enjoying the beauty of LTE for years but we've been paying for it with very horrible battery life.  Now things are a point where LTE doesn't affect battery life as much, so now Apple comes into the market.

Nothing new to iOS 6.  Nothing really worth mentioning anyway.  You already know there will not be any Google Maps on it, but it will have Apple's own mapping service that will provide turn by turn directions.  It will not come with a Youtube app but Google has already made a new iOS youtube app so that shouldn't be an issue either.

What do I hate?

You know I have to talk about the things I dislike about this phone.  First thing I really dislike is the name.  Where is the 5 coming from?  It's not the 5th iPhone, it's the 6th.  It's not running on some 5G network because there is no such thing right now.  It's not the 5th design of it either, there was the original, then the 3G looked different and then the 3GS looked just like the 3G and then the 4 came out and that looked different but then the 4S looked just like the 4.  So if we were going by design this would be the 4th.  Basically the name makes no sense.

That's really the only thing I would say I just hate.  Other than that in my opinion the phone is a very nice phone.  I'm sure it looks absolutely beautiful in person.  I'm just very sad that it still has the same old iOS that I'm so bored with.  I also feel like aside from the new larger screen and possibly nicer looks, there really wasn't anything that made this phone stand out.  It's almost like the iPhone 4 was perfect for Apple and they decided from there on they'd just slowly fix little issues here and there.

I mean, come on, they had a whole year to come up with something cool and new.  Even for the iPhone 4s you had Siri, it wasn't what any of us was really expecting but at least it was something.  What did they do all year besides find ways to sue everyone?  Samsung may miss a lot of hits but at least they are swinging.  There are a LOT of cool little things about the S3 that I love and the Stylus on the Note keeps getting better.  They didn't get all their ideas from Apple, they are coming up with new things as well.

Maybe that's Apples thing, in order to keep Samsung and others from copying their ideas, they'll just not make anything new!  It's . . . . Magical!!

Should you get it?

Well, a lot of you will get this phone simply because it's the newest iPhone.  I don't blame you, I'm the same way.  But for those of you who want to put a little more thought into it, think about this.  There is absolutely nothing that this phone can do that the 4S with iOS 6 wont be able to do.  Unless I'm mistaken and Panorama and picture while video recording end up being an iPhone 5 only thing.  Other than that, there is nothing.  Will it be faster?  Sure, but can you honestly say the iPhone 4S is slow?

So, think about it.  The way these networks keep trying to charge us more each year while at the same time giving us less, maybe signing another 2 year contract for this phone may not be worth it.

Would I get it?

If I was into iPhones and I had an upgrade coming and i could afford it, hek yea I'd get it, but I'm sick in my head and I have some  weird technology obsession!  Now if you ask me "Do you wish you could get it?"  the answer is no.  I got me a Galaxy S III this week and all bias aside there is no way I would trade that phone for an iPhone 5.  But that's me.

Ok I've wasted enough of your time,  Thank You for reading, please make sure to leave your comments here, Google +, Facebook or Twitter.