ASUS has the right idea

Imagine that you have this phone you really like: 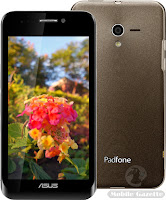 Now imagine that you really like your phone but there are some things you'd rather do on a tablet, things like browsing the web.  So you take your phone and you plug it into the back of a device that turns your lovely phone into a Tablet.  Not only that but this device has a battery that will charge your phone while in use. 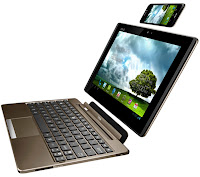 Lets say you started typing a document but decided you'll finish it when you get home because you really just don't want to type all that in a smaller keyboard and you'll probably need to be doing a lot of going back and forth and you just really need a full size keyboard and mouse.

So you get home, you take your phone out and place it on a docking station that is connected to a monitor with a keyboard and a mouse, turning your phone now into a type of desktop computer. 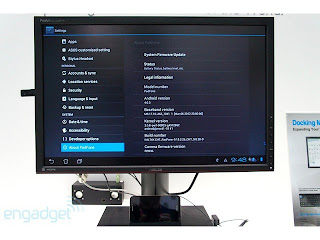 This all sounds really cool and it's not the future, this is now with the Asus Padphone.  The problem is that even thought the idea is amazing, the Padphone just isn't quite ready for it.  All the reviews I've seen mention the fact that things aren't as smooth as you'd like.

The Padphone also runs Android 4.0 which I believe is great for phones, I also believe it would be pretty good for tablets but devs just aren't making many tablet specific apps.  Too many Android tablet apps are just bigger versions of the phone apps.  Even Google's G+ app on the tablet sucks.  So if Google doesn't want to put the time into making a real Tablet version of their own stuff, why would anyone else?

With all that said, I still strongly believe that this is the future and Android is the OS that I think can certainly get us there, if Google ever grows a pair. Phones keep getting more and more powerful so I can certainly see us in the future having everything run from our phones.  I can see how the phone will be the CPU of many of our devices.

Which is kind of scary at the same time, I've never been a big fan of a device that does everything for me.  Even now I still carry a digital camera with me because I just don't want to take pictures with my phone all the time.  So to think of everything running from my phone and then breaking it?  I don't know about that.  But to be able to do all my computing from one place?  I don't know, could be worth it.