So what is this Chrome OS?  Well, Computers always need some kind of operating system in order to work.  We are mostly all used to the one called "Windows".  Or the one called "MacOS".  Some of you probably even know "Linux".

Google had the idea that now a days a lot of us only use our computers to do things online.  Be it to be on social network sites or checking emails or just catching up on the news.  So they created an operating system based on their Chrome web browser.  Basically the whole operating system is just their web browser.  So you don't have to worry about installing or uninstalling programs, or what kind of stuff is running in the background that is slowing down your PC, or basically just a lot of the issues a lot of crapware gives our computers now a days.

The idea is to have a computer that will get you online in just a matter of seconds. 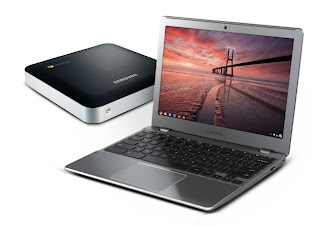 The Laptop type computer above is the the Google Chromebook while the other one is the new Google Chrombox.  Chromebooks they've done before, this is the first time they are doing a Chromebox.  These are not monster computer systems as far as specs, but Google Chrome uses so little power that these systems can certainly manage to handle it just fine.

Here is where I have a problem.  The ChromeBox which is simply just a little computer like the MacMini that you connect a keyboard, mouse and monitor to it, costs $329 while the ChromBook laptop style costs $449.

I like Chrome, I really like the idea of it, there is certainly a lot of people out there who never use anything on their computers other than a browser.  But these prices kill it for me.  If I want a desktop computer, I may not be able to get much for $329, but I can certainly get a full desktop for not much more than that.  If I wanted a laptop I can certainly find something for $449 that would be a full laptop.

If these things were $199 and $299 I'd seriously consider them but at these prices I can not tell anyone that they are a good idea.  I just can't because sooner or later people WILL want to do something that you can only do on a real computer.

Now if Google wants to take that Chromebook and Change the OS to Android and put a capacitive touch screen on it, I'll buy one for $449!  Which brings us to the question of why is Google even trying to force this OS into becoming a reality when they already have a very good operating system with thousands of apps?