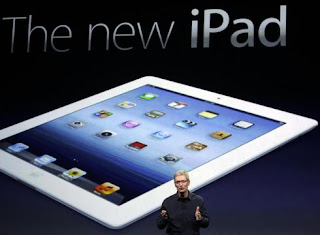 Well today was the day that so many have been waiting for.  The day when the new iPad would be announced.  So how was it?  Well, to be honest, there really wasn't anything surprising.  Don't get me wrong, it's a very nice device and I already ordered one, it's just that there was nothing that wasn't already being expected.

Well I can't really say that, there is one thing that did catch me off guard.  Everyone said that it wouldn't be called an iPad 3 and that instead it would be called the "iPad HD".  However the official name is "The New iPad."  Kind of a weird name.  I keep thinking they really wanted to call it "iPad HD" but then realized that everyone thought that's what they would call it so they said "F you guys we'll call it something else!  We are not that predictable!"

The display is the main strength of the new iPad, it has a High Def 2048 X 1536 display.  I haven't seen it myself but I'm sure the thing must look very sharp and bright.

Other than the display "The New iPad" brings a faster CPU and Graphics processor.  Honestly this isn't all that exciting for me because the iPad 2 has a better processor than the original iPad but I never found a HUGE difference between the two.  Yes the iPad 2 runs faster and it certainly looks nicer but it's not something that completely ruins the experience on the original iPad.  So I expect things will be the same between the iPad 2 and The new iPad.

The new iPad also brings a 5 Megapixel camera that is basically the same camera as the iPhone 4S.  It will be able to record full 1080P video at up to 30FPS.  I'm sure this will be a welcome feature for a lot, I still don't think I've ever really used the camera in any of my tablets.  I've used them to test things but I've never considered them real cameras.  Well with the exception of the front facing camera which I use for skype.  The front camera on the new iPad is still the same old VGA camera.

There will be 2 different iPad versions in the US as far as the Radio ones go, one for Verizon LTE and one for AT&T LTE.  This is done because both of these LTE services are too different to keep into one tablet.  However, you should be able to use any 3G signal from any carrier in the world with either of these versions.

Another think you'll find The new iPad brings is the ability to do dictation.  You press a mic button on the keyboard and it makes a Siri type sound.  You can then talk and once you are finished talking it'll go ahead and type everything you said.

Finally they are promising up to 10 hours battery life without 4G and up to 9 hours with the 4G.  The  new iPad is a little bit thicker than the iPad 2 but I'm sure that has to do with a bigger battery and 4G radios.

There are some things that The new iPad doesn't have, the first one being Siri.  Not sure why they decided to not implement Siri on this or if they just forgot to mention it (which I highly doubt).  Honestly I'm not sure how useful Siri would actually be on an iPad, they obviously used the technology for that Dictation program but the actual Siri is nowhere to be found.

Still no SD Card reader!!  They announced iLife for the iPad and the new iLife application this year is iPhoto, they showed how great the iPad will be for photographers with so many effects and things like that, but they still don't provide a nice simple SD card reader for us to use.  Still going to have to keep using that dongle that I dislike so much, I feel like that thing is messing up the iPads connector all the time.

No tactile feedback on the screen.  Some people were thinking this is what they meant when on the invitation they said "And Touch", but no, it's just a very pretty screen but no tactile feed back.  I honestly didn't expect that, I know they are working on the technology but I don't think we are anywhere near ready to mass produce that.

A truly killer feature!  Aside from a nice looking screen I didn't see anything that made me go "wow!! Damn you and your imagination Apple!".

If you are like me and need to have the newest gadgets then we already both know that you'll get this iPad.  However, for most of the people out there the big news might just be the iPad 2!  Instead of discontinuing the iPad 2, Apple will continue selling it at a lower price.  The 16GB Wi-Fi only iPad 2 will now be $399.

I expected the iPad 2 to drop to $400 simply because they usually do that in order to get rid of inventory, but if they plan on selling the iPad 2 for $400 for good then that means really bad news for any Android Tablet manufacturer out there.  I love Android but right now the ONLY real tablet (full tablet not something like the Kindle Fire) that I know of that can compete with that price is the Asus Transformer TF101.  So Samsung it's time to lower those prices!

Well I hope this info has been somewhat helpful for you!