Ok I promised I’d write a review about the new iPad and here it is. 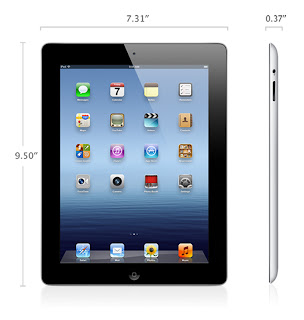 First of all, what do we have?  We have an iPad that looks just like the previous model (iPad 2).  It is a little bit thicker but not so much thicker where iPad 2 cases wont fit it, and it is also a little bit heavier but these are differences that you can only see if you are holding both of them.

The main big difference with this new iPad is the Retina Display that provides us with a 2048 X 1536 resolution.  That’s a higher resolution than most computer monitors.   The new iPad also sports a A5X processor which provides us with a Dual Core CPU and a Quad Core GPU.  So what exactly does this mean?  It means that as far as CPU speed we have the same old CPU as the iPad 2.  The CPU is the one that processes all the data the system needs to do.  The GPU however is what takes care of the 3D graphics and display.  In order to keep that retina display going and giving us better 3D games, a better GPU was needed, and that’s exactly what they did.  So what does this mean to the average user?  It means your programs will run about the same as they do on your iPad 2.  If you are into gaming however you will be able to get much nicer looking graphics if the games take advantage of the GPU.

The screen of the new iPad is what everyone is talking about.  So, is it as amazing as people seem to think it is?  Well, that once again has a lot to do on what you plan on doing with it.  The screen looks nice, I wont lie, but if you just do email, web browsing, books, small games with your ipad then you probably wont really notice a big difference unless you put that iPad next to an iPad 2.  The Screen on the iPad 2 was nowhere near horrible.  Truth is that you get used to the screen real quickly and you are just left wondering why your application just crashed on you.  Now if you like playing some of the more  hardcore games, and when I say hardcore I mean just the fact that a lot more resources went into making them, you will certainly appreciate the screen.  Also if you are into photography then the high res screen is a great thing to have.   So with the exception of Photography and Video Games I’d say the screen doesn’t feel like anything special after the first couple of minutes of “oooooh” and “aaahhhh”.

The rear camera on the new iPad is nice, it’s like a mixture of the iPhone 4 and the iPhone 4S cameras.  It records video at 1080P resolution and it takes 5MP pictures.  There however are very few times when I’d consider using a tablet to take a picture.  Either I saw something I really liked and I didn’t happen to have another way of taking a picture with me at the time, or I’m in a meeting and decided to take a picture of a white board to add to my notes.   The front facing camera is nothing special, just the old VGA.  REALLY wish they had updated this one since when it comes to tablets, this is the one you’d use the most with things like Skype and Facetime.  But truth is for these applications VGA tends to be good enough.

Well I don’t have the 4G LTE version of the new iPad, but it’s 4G LTE, the speeds will always depend on how full your network is and where you are.  I’m sure the 4G LTE is a welcome addition.  Although personally I prefer to just tether my 4G LTE phone to the iPad.  There is a lot of people complaining about how much data they are using with their iPad.  Well, maybe if these people would learn to take advantage of Wi-Fi networks in the area rather than just leave their iPads using the 4G connection all the time they wouldn't be having all these problems.  Also what did they think would happen after streaming so many HD videos?   Using a phone tethering plan not only can I hook up the iPad when I don’t find a wi-fi hotspot, I can also connect other devices to it.  So that’s certainly something to think about.  The only downside is you can’t really use the messenger app unless you are connected online and you’ll just have to wait to get your Facebook updates.

The new iPad only has the usual Apple dock connector in the usual place.  This is kind of a bummer, with applications like iPhoto and that beautiful retina display this is a great tool for a lot of photographers, but they still refuse to add a dedicated SD card or any kind of expandable microSD card storage.  You can still load pictures from an SD Card using the Camera connector kit, but then you have to remember to always carry that thing with you.  I’ve also never been a fan of the connector, feels like it would mess up my connection on the iPad.   But that’s just my opinion.

There are a few things some people are complaining about.  As mentioned earlier a lot of people are complaining about this thing eating up data quick.  Well, that’s not the iPads fault, if you leave it on 4G because you are too lazy to switch to your home’s wi-fi and if you go around streaming a ton of music and video, then that will happen.  The Screen makes HD stuff look nice and all but don’t abuse your data plan.  Another thing people have complained about is it getting warm, the area by the CPU does indeed get warmer than any tablet I’ve noticed.  However for me it has never been something that is so hot I can’t touch it.  I can usually touch it fine, but it does get hot enough where you wonder if this is ok.  It also gets hot enough where it does become uncomfortable to hold for long periods of time.

So the big question for a lot of people is “Should I upgrade from my iPad 2?”

Honestly, no.  If you just do things like web browsing, email and reading I wouldn’t even upgrade from an original iPad.  The only reason to upgrade from an iPad 2 would be if you just have to have the latest or again if you are into photography and feel the screen would help you out a lot.  As far as computing speed the new iPad has 1GB of ram while the iPad 2 has 512MB of ram, so the new iPad has twice the memory but that really only translates to applications loading a second or 2 faster.

So what if you don’t have an ipad and are looking for a tablet?

If you are looking for a tablet and you don’t have one already then the new iPad is certainly worth buying.  It is a very good tablet that should last you a good couple of years.  You could also get an iPad 2 which is now $100 cheaper ($399).  If you are trying to decide between the two and you could easily acquire either I’d certainly pay the extra $100 for the Retina display, nicer camera (which could be useful at times) and the extra 512MB of ram.  But if you really want an iPad and can’t find the new iPad then the iPad 2 is certainly a great deal at $399.