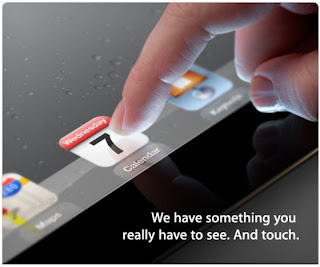 Thinking about getting yourself a new iPad?  Well, you  may want to stop and think for a second.  Why? Because there is a new better Android tablet coming out?  Not exactly, but this Wednesday Apple is expected to announce the new iPad HD, or iPad 3, or iPad 2s, or whatever they decide to call it.  Although It's really looking more like iPad HD.

Now, I'm not a fan of Apple rumors and I've been trying my best to keep them away from my Blog, but I figured with the announcement coming in just a couple of day, why the hell not?  But remember, these are all just rumors, we wont know anything for sure until Wednesday.

First there is the basic obvious improvements, it is expected to either have a much faster dual core processor or a Quad core processor.  I'm not too sure about the Quad core processor, these processors are still fairly new and Apple isn't really known for jumping into new tech. I would also expect it to have a better graphics adapter for better looking video games.

The new iPad is supposed to have a screen resolution of 2048 X 1536.  This would be better than any laptop resolution I've seen.  It would also allow for full 1080P resolution, so if this is true I'd expect some major Apple TV integration.  Based on the invitation image I've posted above, I would certainly believe that there is something special going on since it says "We have something you really have to see."

It is also expected that there will be no home button anymore and that this iPad will have more gesture commands and that would be why on the image on top you don't see a home button and also why it says "And touch".

I would expect the new iPad to have 4G LTE capabilities.  Apple was strongly criticized for not having it on the iPhone 4s and I doubt they'd go once more without it.  I'd expect there to be a better battery that still offers the same life time even with 4G LTE.  It is expected to be a little Thicker than the iPad 2 and that's probably because of that battery.

We wont know if any of this is true until Wednesday, but the main reason to wait on buying that new iPad is the fact that normally when Apple introduces a new device, they have to get rid of the old ones, so usually those end up on sale.  I remember when the iPad 2 came out, the $500 iPad was going for $400.

I just know I currently don't have an iOS device and I have spent a lot of $$ at the App store from when I had my iPad and my iPod Touch, so it's about time I get some sort of iOS device, it just may be the new iPad HD.