Verizon doing less and less for you 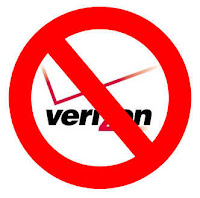 Ok it's time for me to rant  a little here, this time about Verizon Wireless and how it seems like each year they can do less and less for you.

I remember a few years ago I had a cell phone that started giving me problems with charging, it just wouldn't charge anymore.  I went over to a Verizon store and told them about it and they gladly exchanged the phone for me for a refurbished phone.  This was a Motorola Droid phone, so it certainly wasn't that long ago, somewhere in 2010.

Late January 2012 my sister dropped her HTC Thunderbolt and the screen on it cracked.   We have the insurance service (Asurion) from Verizon so I went ahead and looked up what I needed to do in order to get it replaced.  Basically everything needed to be done online but the insurance company would overnight a refurbished phone and then we had 10 days to send the old one back.  The only part here that really bothered me was the fact that she still had to pay $100 to get the replacement.  I don't like it since we are paying monthly for insurance, but hey it was her fault that she dropped it and $100 is better than $500 for a new one.  I did wish we could have just gone to the store and gotten this taken care of, but I figured since she did drop it, I can certainly see how this would be acceptable.

Well all of a sudden this Saturday that phone decides it will not charge anymore, just like the time my Droid wouldn't charge.  THIS in my opinion is not our fault, this is a manufacturing issue.  So as a customer I do feel like I should be able to get much quicker service.  So I take the phone to Verizon just like last time to get it replaced.  However this time I'm informed that they no longer do that, now I would have to contact the insurance company again and wait for them to send me another one.  The guy at the store did plug it in and verify that the phone no longer charged, but he insisted that there was nothing he could do.  I had him call another store and they also said the wouldn't be able to help.

At this point I was just already very upset because I had been calmly waiting for a while for this guy to finish with the previous customer only to be told that I have to deal with the insurance again and that basically I'd have to be without a phone until they send me another one and that if that one was messed up also then I'd just have to keep sending them back until I finally get a good one.  They didn't say that, but if every time I get a bad phone I have to deal with them, then obviously that's what would happen if I got a bunch of bad phones in a row.

I had a tablet internet line that was not on contract, so right there I told the guy that I'd like to start canceling my lines because it seems like the longer I stay with Verizon the less and less they can do for me.  The guy tells me they can't cancel lines there, I would have to call verizon.  This blew my mind, the store is totally useless if you want to do anything other than buy a phone!

To be fair, the guy one the phone that helped me cancel the line was very polite and he did give us some promotion that saves us $20 a month for 12 months.  Also this is my personal experience with Verizon this time, I'm sure the way cell phone companies do things here in the US it is probably the same with other carriers.

I love the Verizon service here in the US, I really do, I get really fast 4G in a lot of places, I am basically never without a signal, so I will give them that much, but year after year their customer service skills get worse and I'm just not sure how much longer I'll be able to continue renewing my contracts with them.  But what's the option right now really?  AT&T?  Never.  Sprint?  Maybe.  T-Mobile?  Kinda scared since I'm not sure what will happen with that company.  US Cellular?  LOL good one.