Ok so I've never written about restaurants here, as much as I love food, I'm certainly not a food critic.  I'm not a very picky eater, I either like what I'm eating or I don't.  I certainly never talk about much in my local area either, but I felt like not talking about this place would be wrong! 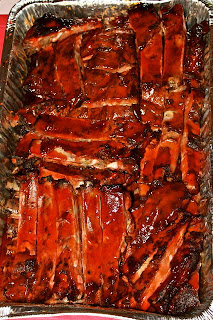 Again, I'm no food critic, but I do like to eat BBQ from time to time and I've gone to plenty of good places, and this is certainly one of the best places I've been to if not the best.  The flavor is not really something I can describe, it's this tangy, smokey flavor, it's just really good.  The ribs although not as soft as you find them in some other places, they are still very soft.  I think if you make your ribs in some other way and then throw bbq sauce on them you can certainly get the falling off the bone experience so many people like, but when you slow smoke them this is really as good as it gets!

For the birthday party we were having we decided to get 2 family meals which are around $35-$40 each.  We did this because we had NO idea how big or small the portions were.  They say it's for around 7 people but you know how so many places say something is for X people and it's really not.  So we wanted to be safe.  Well, we ordered WAY too much, these pans are actually pretty darn big and 1 pan of ribs can certainly easily feed 10 people, 7 really hungry ones.  So seriously, $40 may sound like a lot, but when I order pizza or chicken for a few friends it usually ends up being around $30-$35 anyway.  For $5 more you are getting the damn best ribs you can get in Wisconsin and many other states.  The family meals do come with a side of coleslaw and baked beans, if you like either of these things, you may want to order extra, those portions are NOT very big.

The Location is the one thing that may scare a lot of people.  Ashley's is a small place in the middle of a not so nice area. The parking lot is not very big and I had to park on the street next to some shattered glass.  Inside it is a carry out only place, there are absolutely no tables, just some chairs for waiting and a couple of really old arcade machines, and Mrs Pac Man was out of order which pissed me off! Inside you will also find that all the workers are behind bullet proof glass.  You pay through a little door kind of like at some banks or doctors offices and they have a rotating bulletproof glass to give the food to you.

With all that said, the time I was sitting there waiting all I saw was some nice local people come in.  They all seemed to be regulars who knew exactly what they were coming for.  So all the bulletproof stuff is a little intimidating at first but they've just been there for a very long time and sadly reality is that they need the protection because in that area stuff could happen.  But honestly I wouldn't be afraid of going in there during the day.  At night when there are more drunks out there I'd be more weary, but than again that's just a rule you should follow anywhere.

Knowing that this is a small place that has been there for ever and that probably gets really busy, I was a bit worried making my first phone call.  Because I had some questions about what I wanted to order and honestly I was expecting some rude jack ass one the phone who just seems to be in a hurry and makes me feel like I'm wasting his time.  But to my surprise, when I called the guy sounded super nice, he was very professional answering all my questions and he was very honest with me, I told him I wanted to pick up my order at around 3:30 and he told me I'd most probably have to wait a few minutes, which I did but not too much more.

When I got there the guy remembered my order without problems.  Since my sister wanted to pay for half of it and I wanted to pay for the other half we asked if they could split the bill and the guy did it without any problems.  At the end, once my orders were done, two of the guys actually came out of their protected environment to bring the orders to my car for me.  I thought that was so extremely nice of them!

My conclusion is that we had a very fun birthday party for my brother in law, and we had some seriously good food and I was afraid of ordering from here because I had never done it before but the service was so great that at the end I felt like I had always been a regular at this place.

They sell a LOT more than just ribs by the way, some day I'll have to check out their cat fish, but they have ribs, tips, shoulder, outside, and a ton of other stuff.

If you live in the Milwaukee area and you like good food, I'd certainly say check out this place if you haven't.