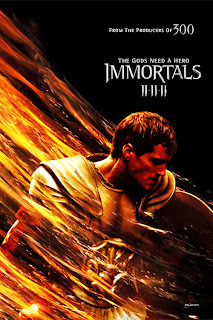 I went to watch Immortals today so I figured I'd let you know what I thought of the movie.  I will start off right away letting you know that it is a rated R movie and even though there is only one short nude scene, there is quite a bit of gore, so you certainly don't want to just take your younger kids to see it.

I didn't go expecting much from this movie because in the past most movies based on Greek mythology always ends up being very much the same.  However, I'm glad to say that I came out rather glad I went to see it.  I caught the 3D version of the movie and I must say it looked great.  Normally I'm not a big fan of 3D movies and I would have enjoyed this movie probably just as much in 2D, but it was nice at the same time to see that they were not trying to force the 3D to work, as in, I didn't notice them trying to make any special shots in the movie just to show off the 3D.  The 3D was simply there and it looked nice, it wasn't a gimmick.

I don't know why but looking at some of the sets right away my mind started thinking they were just miniature sized sets and they just added people to it to make it look bigger.   Like I seriously started thinking some of these may as well be made of Lego.  And it's not that they were bad, they weren't, and maybe it was the 3D making it feel like I was just looking at a box with a model in it but that's just what some of it felt like.  With that said, most of the movie looked amazing, it had some really good special effects, the gore at times seemed a little unrealistic but still fun to watch if you are into that.

Story wise there really isn't a whole lot going on here.  You have this King who at some point had his family sick and he prayed to the gods but they never answered his prayers, so now he wants to release these Titans so that he can kill the gods.  There is also a mortal man who is destined to save the world.  Zeus believes in this man and he himself goes to earth as a mortal to help train the man.  Then there is War and love and all that good stuff.  Actually there wasn't much love going on in this movie, they focused more on action, which was nice.  The thing that really makes you think about the story is, you are a mortal king who has all the money you could want, and have all the women you could want and you have an army that no army on earth could stand a chance against, but you want to release these Titans so that you could try and kill the gods.  However, who decided that these Titans were so loyal that they'd do what you want them to do and not kill you?  Sure, you could argue that the Titans would want to kill the gods anyway, but then they'd still want to go kill you.

To watch and enjoy the movie you don't really need to know anything about the Greek gods, they hardly mention them, so as long as you understand that these are gods, you'll be fine.  However, knowing some basic mythology sure does make it a lot more interesting.  Hearing familiar names like Zeus, Aphrodite, Athena and Poseidon is always nice.  Towards the end there is quite a fight between the Titans and the gods and if you know the gods then it becomes even more enjoyable.  If you are a fan of Athena for example she does some major ass kicking.  The fact that they don't mention all of these gods by names makes it a bit difficult at times however because you are just wondering which one it is.  For example on this one scene Ares gets disciplined by Zeus, but I didn't learn it to be Ares until later.

One thing I really didn't enjoy was the casting for some of these gods.  Zeus for example:

How am I supposed to see that and think "Zeus"?  I think of Zeus and I think older big strong powerful guy, not THIS!

Here is one worse, Ares!!

How am I supposed to see this and think "god of War"???

All joking aside, this was a pretty good movie.  Not a Great movie in any way shape or form, but still very much enjoyable.  It did have some interesting points that can certainly be brought to normal day Religion.  For example, Zeus mentions that he doesn't want to intervene with humans because he has faith in them.  A lot of us are always talking about how we have faith in God but we never think about God having faith in us as well.

Action on this movie I'd give it a 4 because it's certainly got plenty of that.
Story I'd give a 2 because there just isn't all that much there.
Cinematography I'd give another 4 because it does look very good.

I'm not going to count Drama, Comedy, Romance or anything else like that because this just isn't that type of movie.